The perfect ending of the beautiful manicure is the colorful finale.
That is why after filing, shaping, nourishing and smooth the surface of your nails, use your imagination to create some fun on them!

The ancient Egyptians had used red and brown paint to color their hands – a practice called Mehndi.
Six hundred years BC in China the Chu dynasty ruled. The members of the emperor’s family used to place gold and silver plates on their nail for decoration. Black and red were considered the colors of the emperor’s family.
In ancient Egypt the red color is also considered a royal symbol. Nefertiti, the wife of pharaoh Echnaton, colored the nails on her hands and her feet in ruby red. Cleopatra personally preferred rusty red. The women with lower rang painted their nail in paler colors. Nobody had the right to use the colors of the pharaoh’s family.
The ancient Incas decorated their nails with images of eagles.
During the ХІХth century the nails were painted with scented red oils and after that polished with a piece of leather.
One century later women continue to polish their nail in order to make them shiny. In the beginning of the XXth century a special paste was sold for that purpose. During that time the nail varnish was layered on the nails with brushed made of camel hairs.

In nowadays in addition to the nail polish we also use base nail varnish, top nail varnish, nail varnish remover, serums for improving the health of the nails, nail files, nail clippers, cuticle nippers, oils, creams, decorative stickers, caviar beads and much more  stuff which contribute  to women  having beautiful hands. 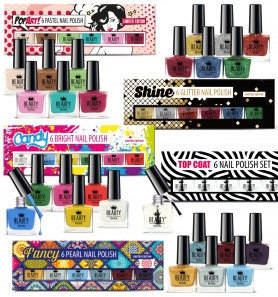